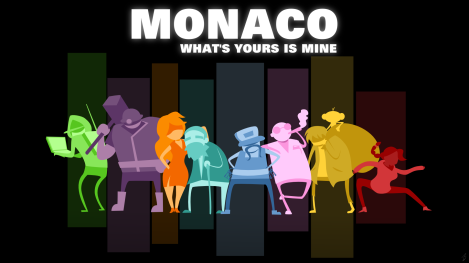 I feel like lately I’ve been on a downward slump with games. After Bioshock: Infinite (yes, I keep bringing that game up because it’s GREAT!) I haven’t found many new releases that have caught my eye. Besides, we’re in that weird downtime between new generations and while I anxiously await my Playstation 4 pre-order, I need something to play in the in-between, or my life just doesn’t feel complete.

Monaco was introduced to me randomly. I headed over to a friend’s place prior to the Game of Thrones season finale and we needed something to do before the show. He asked if I wanted to play Monaco: What’s Yours Is Mine to which I replied, “what the hell is that?”   Well, it turns out “that” is a really freakin’ addicting indie game that has you and other players take roles in a heist crew and essentially, steal lots of things. There is a really cool story there, though, so it’s not just pointless 5-finger discounts. You get to choose from a variety of characters; the locksmith, the lookout, the mole, and the pickpocket, as well as unlocking a variety of others as you play.

All I remember is playing with the full four players and laughing hysterically. Like, abs hurt, can’t breathe laughing. So recently this good friend of mine (you can check out his awesome play through videos at Rob Plays That Game) got a 4 pack of Monaco on Steam and I finally settled down last night to play, chatting over Skype. More ridiculous belly laughs. Seriously, there’s nothing better than trying to work as a team only to have someone be seen by a guard and someone yelling “every man for himself!” and we all scatter across a level, laughing at our ridiculous deaths and learning that planting bombs in a panic is usually a bad decision.

When I’m not playing Monaco, what else is on my plate? Well, I’ve finally taken the plunge in playing Dark Souls. I know, 2 years too late, but I had other games on my list and honestly, was a little afraid at the stories people told of just how difficult this game is.

But for the price of only $17 on Amazon, I picked my two copies; one for me, and one for my boyfriend. We’ve decided to place a bet on who can complete the game first. I’m very certain I’m going to win, but we’ll have to wait and see. 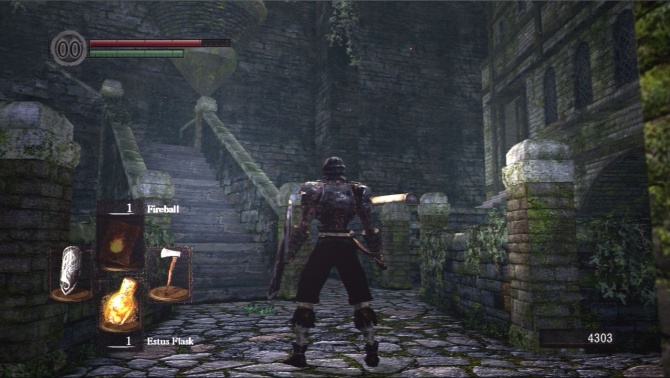 So far, I’ve rang the first bell after an arduous journey (oh man, what a satisfying experience) and the game makes my thumbs sore and my brain hurt, racking it, trying to figure out the best way to do things. But, contrary to the fear I had going in, I love it. Yes, it is difficult, yes, it requires patience and yes, you will die. A lot. But so far I’m finding a lot of satisfaction when I do get passed each challenging area. I do not, however, appreciate the folks who like to invade my game and kill me, then do a little dance over my corpse.

But I still find a certain pull back to the game, the kind of pull where you think about it when you aren’t home, can’t wait to get a controller in your hands to continue. So maybe I’m a bit of a masochist. But just writing about it is making me want to get back into the fray and die just a few times more.

What are you guys playing lately? Leave a comment and let me know!