It’s been a while since I’ve talked about what’s on my currently playing list. My how things have changed in a few months time. I’m playing some old, playing some new, and make the most (?) of unemployment.

OK maybe my conversations don’t really sound like that. Or if they do, I might wanna get my head checked.

Point is, everyone is talking about it and it makes sense. I mean, it’s an FPS meets MMO by Bungie and has been hyped up all year. I got on the hype train, choo choo!, and pre-ordered the game some time ago so I’ve been rocking it since day 1. My views on it are mixed.

I hoped that patrols would be more fun but it seems like you are just patrolling big empty planets. I want more Bungie, give me more! I understand this is a “10 year game” but like, make me feel as if the first iteration is worth my full $60.

OK, let’s talk about games I totally missed out on in the past but I’m gleefully enjoying now. So, I finished Witcher 1 a couple of months ago, in between was playing Dragon Age (LOVED it. Marry me, Alistair.), and now I’m moseying along in The Witcher 2 (on PC).

I’m not sure how I feel about it compared to 1. Although 1 starts off with some pretty bad dialogue and a kind of boring start, once you get into the first town things get SO good. And after getting used to the combat mechanics, I liked it. I hate that in The Witcher 2 you have to meditate before hand to drink a potion. 9 times out of 10 this ends up in me getting killed in a battle I didn’t see coming, to have to then go back to my old save to meditate and prepare for said battle, instead of being able to make those decisions in the midst of everything. That and I’m not sure how I feel about combat, I feel like I better understood how my strikes were affecting opponents in 1 and in 2 it’s like, just hack and slash away and pray you don’t get surrounded. And roll. Roll a lot.

Granted, I am only a few hours in so my opinions still need to develop. I just don’t know! It’s not pulling me in the way Witcher 1 did. 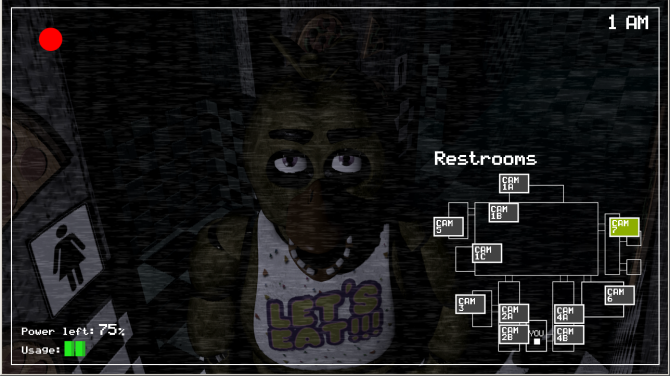 I love scary games. I do. But something at Five Nights at Freddy’s just really freaks me out, guys. You are just a guy (or a girl, hell, I don’t know), in a room, as an overnight security person in a pizza place from hell. In said room are security cameras to look at and doors to shut closed just in case some MURDEROUS MECHANICAL ANIMATRONICS COME AND DECIDE TO STUFF YOU INTO A BEAR SUIT.

You can’t move. You can only..observe. You can watch said robotic grizzlies of doom on camera and if you look at them, they can’t move. But if you aren’t eyeballing them, they can make their way closer to where you are. But the thing is, you can only look through one camera at a time. and oh, yeah, you run out of power the more you use the cameras. Or those neato security doors. Or lights so you can see them looming in the hallway next to you. And if you run out of power, you are done. DONEZO.

I noped the hell out of there after the first night, the first time I played, and I have a high tolerance for scary. But I just didn’t understand the controls and what I was meant to do and I think that didn’t help the situation. The second time around, I got through night 1 no problem. By the end of night 2, one of my doors jammed and I knew I was done for. Yup, death.

Now I’m up to night 3 and honestly… I’m stressed, guys.  I don’t know, man. I don’t think I’m meant for all 5 nights. I quit. Someone else can take this shit job.