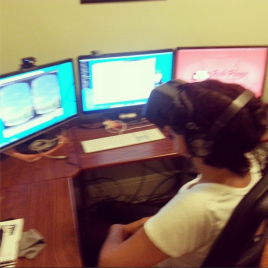 Because I have friends with exquisite tastes who love to jump on new tech, I got to experience the Oculus Rift myself and a variety of demos that have been released for it. Plenty of people are  coming up with cool demos to try out with the latest Rift Dev Kit 2 and I had the pleasure of test driving a handful. Before I get into the demos particularly, I want to talk a bit about the experience of using the Rift in general.

First,  it’s fairly easy to get started, but your pupil distance measurement is key for things to show properly. There is a tool to use to help the Rift figure out what works for you and while by no means is it super accurate, it gets the job done. Once you fiddle with that, you’re good to go. The Dev Kit 2 is obviously a lot bigger than what they are planning to create for a final home product. They are already looking into more streamlined, lighter designs. That said, for as big and bulky as the Rift currently is, it’s surprisingly not too heavy, though it does odd hit the top of your cheeks which can feel sort of funny after a while of using it. It’s fully adjustable so I was able to fit it perfect to my smaller head as opposed to my friend who, as a guy, wears it at a bigger size.

Other than that, it’s really non-intrusive and as long as you don’t stare through it when a demo isn’t running (which was making my friend prone to almost instant headaches), it’s pretty easy to just open your eyes and get immersed.

Now, on to some demos I got to check out: 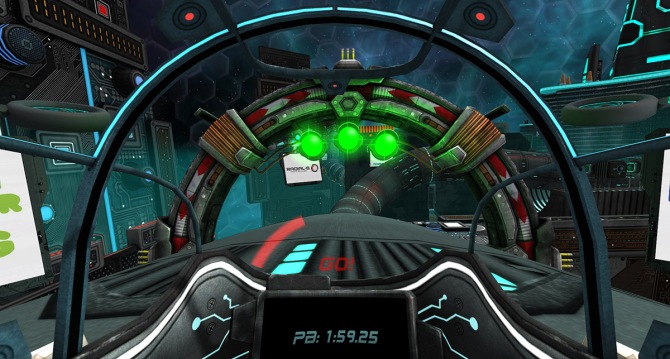 Radial G: This demo puts you in a cockpit of a racing car attached to a cylindrical road. You can spin around that road as much as you’d like, which I learned myself by doing it constantly and making myself beyond dizzy. You don’t race against anyone else and it only ends when you want it to. I was pretty much immersed from the start; it really shows off the speed and the kind of gravity defying, dizzy-inducing games that can be produced. After about 7 minutes or so my brain couldn’t handle anymore, but I did really enjoy it and it made me want to see an Extreme-G like this (yes I was on that side of the Extreme-G/F-Zero battle). They were trying to raise money on Kickstarter to make a full game of Radial G but unfortunately they did not hit their goals. I do hope to see them find a way to continue the project, though.

Millennium Falcon Experience: It’s just what you think it is; walking around the Millennium Falcon. It’s a very small demo, where you get the main training area and the cockpit, and that’s about it. Word is this demo was put together in just a day, just to see how something like this would work. All I could think was, what would this be like if characters were walking around that I could interact with? And then I had about 2 minutes of daydreams of how great a game that’d be. 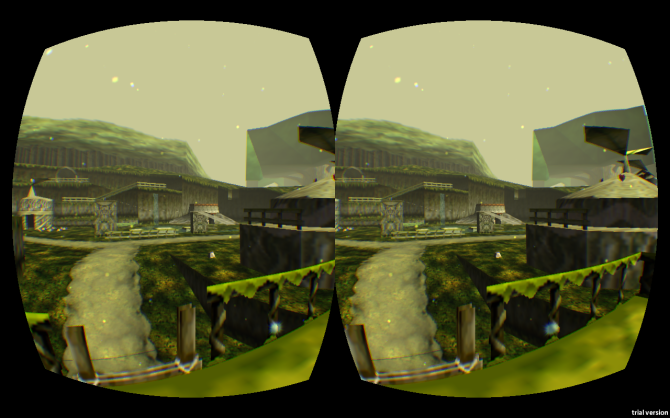 Kokiri Forest: When my friend put this demo on, I squealed and my mouth dropped. Here I was, standing in Kokiri Forest, the opening of Ocarina of Time. And it.  Was. Glorious. Well, save for the fact that you moved like molasses. Clearly I wasn’t actually Link, otherwise I’d be able to tumble and yell “Cheeeaaah!” and cut grass like a crazy person. But when I went to go see the Deku Tree… I had a moment. It was huge and awesome and I could look up at its wondrous branches and its oddly shaped face and just thought, this is everything my 12 year old self ever dreamed of. 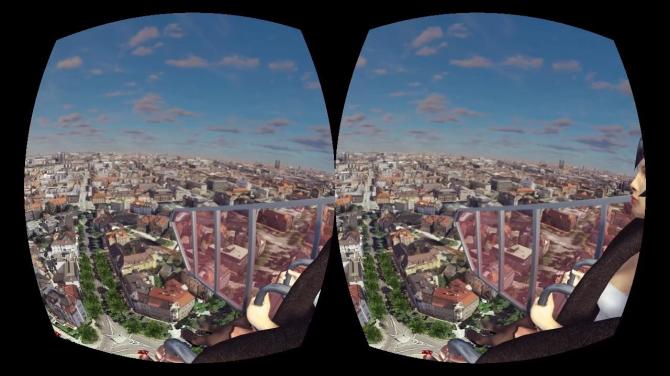 Cyber Space Ride: Cyber Space Ride is one of the earlier demos I saw on YouTube when people were first playing around with the Rift. It has you on a ride called Cyber Space that essentially is a theme park ride that flips you around, up and over and upside down, like an insane swing. The way it tricked my brain into thinking I was actually making some of the descents was mind boggling. Here I was, sitting stationary on a chair, and still felt that feeling in my chest like my body was experiencing Gs. That, and the ability to hit the space bar and send your body flying as far as you can before splattering on the ground left me with a very satisfied demo experience.

Chilling Space: Another simple demo but a great one. You float out in space, gun in hand to shoot meteors (if you want to, not even a mandatory thing), floating just above Earth. I looked around at the stars and details forever, lost in the fact that I could literally look any which way and just see nothing but awesomeness. simple, but beautiful.

Ocean Rift: This last demo…well. I could explain to you what happened, or you could just watch the YouTube reaction video my friend posted of me:

What are your thoughts on the Rift? Do you have a dev kit or were able to try out any demos? Which ones would you personally want to, if you could? Let me know!

One thought on “Hands On Impressions of The Oculus Rift”