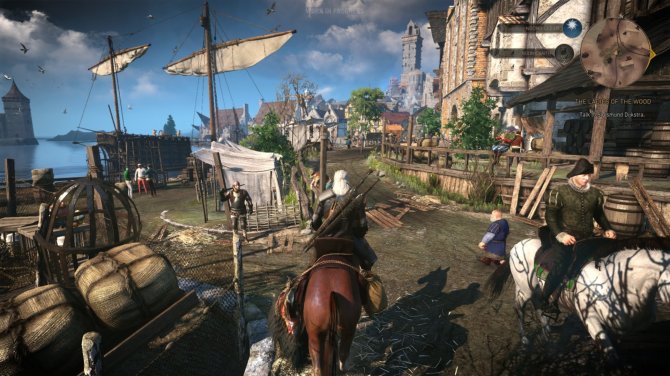 I was lucky enough to snag a copy of the Witcher 3 early. Can’t say how, can’t say where, but we all know these things happen. I played much of it over the past weekend and, as someone who has played the previous two, am thrilled to say so far, it delivers. Here are some of my initial impressions:

Geralt is as bad ass as ever. It’s nice to be back in Geralt’s shoes. He’s older, he’s got his memory back so now obviously wiser, and he’s still witty in his gravelly, awesome voice. It’s just nice to be reunited with such a great, morally grey character. Feels like I’m back in the saddle.

The world is huge. HUUUUGE. One thing I realized from the get-go is the world is overwhelmingly big. This is no holding your hand for the first hour or two of the game in a relatively small space sort of set up. Even though you start in a town, that town is just a small space on the road of a map that is HUGE. And oh yeah, that huge map is just one section of a larger world map and so everything is pretty much massively overwhelming. I easily rode off into areas where I was underleveled and quickly noped my way out of there, with plans to return. You know, after I do the twenty million other things that keep popping up EVERYWHERE I TURN.

Gwent is addicting. The new mini game of the Witcher world is Gwent, replacing Dice Poker of 1 and 2 (RIP).Gwent is a card game you play with NPCs where you both are generals of an army and your army is your cards. You play cards with different strengths and that have specific abilities, or weather cards that may affect the ability of your different units; close combat, ranged combat and siege combat. You can play and beat people for special cards or buy cards from merchants to build your deck. I’m already playing a character who has beaten me repeatedly, but I just keep trying because it’s addicting and quite frankly, fun. I’m jealous of the special edition people who will get an actual deck.

Camera angles are a funny thing. One negative I have noticed is that the camera can be a little, well, annoying. It’s not that I don’t have control over it, but even still at times I feel like I’m doing a lot of twirling around with it when sometimes a monster might be off to the left of my screen; Geralt will go to fight him and now he’s to the left, and I can’t see what I’m doing well until I play around with the camera. It’s also gotten into weird corners in indoor areas, much to my chagrin. Annoying, but not game breaking.

Graphics are pretty. I’m playing on the PS4, so keep that in mind when I say, it’s pretty. The sky is beautiful during sunrise and sunset, the water looks amazing (isn’t everything graphically always based on the water?) and there are certain details in the grass, trees, and other elements that look great. I can only imagine what it will look like on a suped up PC rig.

Combat is spot on. The combat is much better in 3 than it ever was in 1 or 2. 1 was just slow and a little clunky at times, and while 2 tried to make things speedier, they took away potions during battles (why? WHY?!) and it never felt all that seamless. The Witcher 3 brings back potions during battle, finally, has all our favorite signs to use, and just feels super nice. I haven’t run into any combat specific issues yet.

So there you have it; a quick look at my initial thoughts, spoiler free. This one is going to give me hours upon hours of entertainment, and I’m really excited to see where it all leads, killing some awesome monsters along the way. At some point I’ll be sure to update on progress and have a more cohesive review put together!